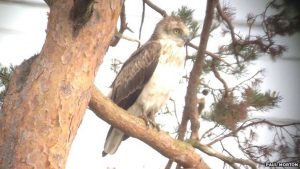 Of course not all interesting wildlife turns up in Southampton itself. Or is predicted.

On Sunday Jan and I took a break from studying hoverflies, studying the various world cup charts and decorating to pop out to the Woodfair at Royden Woods. Local crafts, wildlife events, and – most importantly – local food and drink tempted us out, as well as the chance to catch up with our good mates Rosie and Dan Powell.

Having been up to our eyes and elbows in paint for the last couple of days, I hadn’t even checked Rare Bird Alert – only so many hours in a day – and it was a complete surprise to find about 60 cars and couple of hundred people lining the road at Pigbush. Obviously a twitch but the scopes were pointing to all points of the compass, so whatever it was, it wasn’t there now. The iPhone quickly confirmed that a Short-toed Eagle (Circaetus gallicus) had been seen in a couple of locations, had been misidentified in another and now had gone missing. The wonders of new technology meant that without a moment’s pause we continued on our way to the Woodfair.

Which is just as well. If we’d stopped we wouldn’t have seen the eagle being mobbed by crows over the farm shop just before Hatchet Pond at about 11.30am. The distinctive shape of a medium-sized eagle with long, straight wings rising over the trees was obvious. In good light, it showed a pale head and leading edges to the wings. The pale underparts were what distinguished this as a sub-adult bird. In a fast bank to avoid the crows it wasn’t quite possible to see in the white patch that showed was on the rump or tail feathers.

As soon as it was safe to do so we turned around and tried to relocate the bird, but whether it had been forced down into a tree or chased away, we were unable to find it again. I’m glad that it had been seen and identified by so many others, because although we saw enough to identify the Short-toed eagle – a bird we were familiar with from continental Europe – our natural caution (that it must be something common if we’ve seen it) would have led to long discussions over our books when we got home.

So – a little delayed to Woodfair. But worth it and suitably toasted with hog roast and cider.