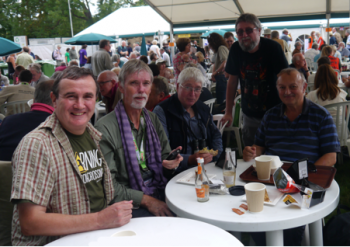 We are delighted to publish a guest post from John Cantelo who met up with old friends from our very own Southampton Natural History Society just a few days ago at this year’s Bird Fair at Rutland. Their memories should inspire us all – young and less young alike.

This August a group of former junior members of the Southampton Natural History Society (SNHS) from 50 years ago got together at the UK Bird Fair for the first time in 39 years.

All but one of them, George Green, also attended Taunton’s Grammar School and three (John Cantelo, Jim Milne and Pete Findley) even went to the same Primary School (Weston Park). The Taunton’s connection is, perhaps, important as at lunchtime we were allowed to roam across a part of Southampton Common where we delighted in watching birds such as Lesser-spotted Woodpecker, Hawfinch and, surprisingly for modern observers, Cirl Bunting. In these days of Health & Safety such freedom probably wouldn’t be allowed – perhaps rightly since one of our friends was run over and badly injured crossing Highfield Road to join us! None of us live in Southampton any longer with one living in Dorset, two Kent, one in the east Midlands and another in Queensland, Australia.

What united us, apart from birds, were our memories of the SNHS in the 1960s. The society offered a warm welcome to what must have often seemed a very annoying bunch of tyro teenage birdwatchers. In particular, we recalled with fondness Hazel Bidmead and Mrs Bassett (did she have a first name?) who ran the junior section …. and, yes, she really did live in Bassett in Bassett Crescent West.

Another person who was always very encouraging, despite communications being hampered by his profound deafness, was Paul Bowman – real polymath of a naturalist being a wildflower expert as well as a keen birdwatcher. It was, perhaps, the memories of being helped and encouraged so much whilst members of the SNHS that pushed so many of us to “give something back”. The source for this brief note, John Cantelo, ended his career in education working as a field teacher for the RSPB at Dungeness. He’s also been a local group leader for the RSPB, served on his county (Kent) bird club’s committee and edited its newsletter. In recent years he’s written various articles for the birding press, co-authored a book on the wildlife of south-west Spain (‘The Crossbill Guide to the Sierras of the South’) and works as an editor for the ‘Crossbill Guides’. He has also written an online guide to birdwatching sites in Cadiz province.

Phil Gregory is now a professional bird tour guide – having earlier worked as a teacher in Nigeria, Zambia, the Falklands and Papua New Guinea. When not leading tours to Africa, South-east Asia, Japan, New Zealand and, of course, Australia he and his wife run Cassowary House, a birdwatchers’ B&B, in Cairns in Australia. He has written many articles, contributed texts to the authoritative ‘Handbook of Birds of the World’ and is the author of a forthcoming field guide to the birds of New Guinea (on which he is an authority).

Closer to home, George Green went on to co-author ‘Where to Watch Birds in Dorset, Hampshire and the IoW’ and write an excellent county avifauna, ‘The Birds of Dorset’, in 2004. He has served the Dorset Bird Club in various posts – chairman, scientific officer and editor of the county bird report. He’s also contributed articles to various birding magazines.

Pete Findley, still a very keen ringer, has been deeply involved in Sandwich Bay Bird Observatory (SBBOT) for over forty years serving in almost every position from chairman down. Although now retired from teaching, he continues to be heavily involved in the observatory’s educational work. He has also written a BTO guide and contributed the chapter on the ‘SBBOT’ in ‘Bird Observatories of Britain and Ireland ‘ (Poyser).

It doesn’t end there as other ‘junior’ stalwarts of the SNHS of the same period, unfortunately not at the Bird Fair, went on to make their own mark in the area of wildlife education and conservation. Another Old Tauntonian (but not a teacher!), John Barker, now works as a species programme manager for the WWF where he plays a vital role in protecting some of the world’s rarest species. Julian Cremona, the same vintage and ‘right career’ (teacher), but ‘wrong school’ and ‘wrong species group’ (insects) went on to run a Field Studies Centre in Wales and write several books including one on wildlife photography.

Given our early interest in birds and wildlife, we may well have continued that interest into our adulthood as we are now doing as we struggle into our dotage. It’s hard to quantify these things, but it’s difficult to avoid the idea that the SNHS played a significant role in getting us through those difficult teenage years not only with our enthusiasm intact but positively blossoming. The society even got some of us monomanic birdwatchers look at things other than birds!

If encouraging future generations to take an interest in the environment was important back in the 1960s, then it is increasingly so today. I like to think that, in our small way, all of us old ‘juniors’ have made an effort to pass on the torch. I hope Mrs B., Hazel and Paul would have approved. So thanks to the SNHS, particularly those who went out of their way to encourage an uppity group of youngsters back in the 1960s!

If you have memories of the youth section leave a comment and we’ll make sure they get passed on to John.