Spotlight on Brimstone – the butter fly 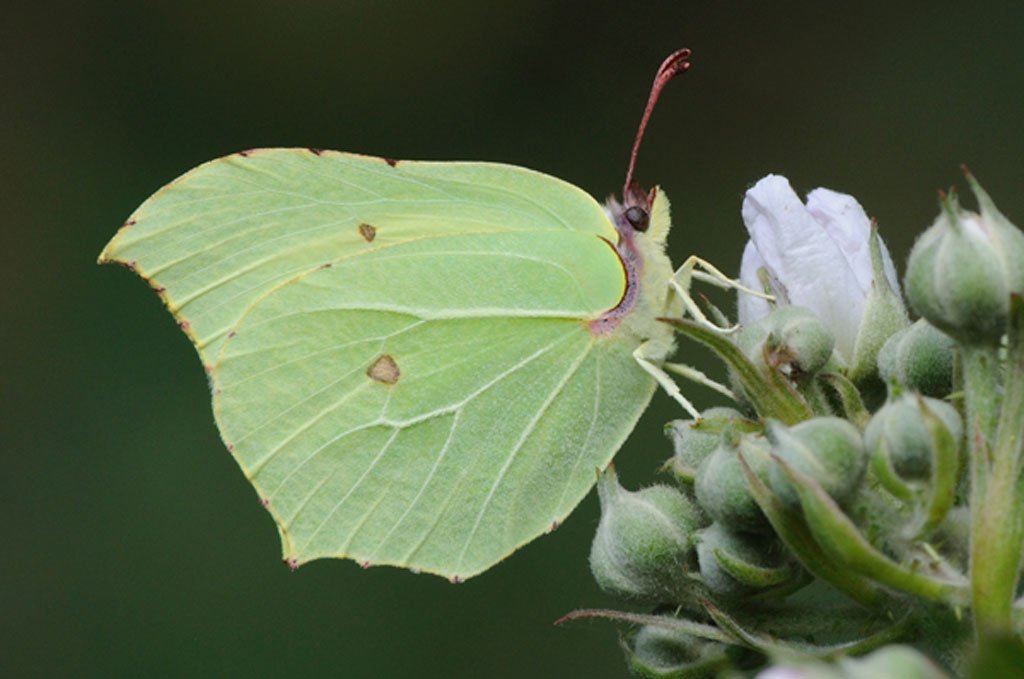 This is the first in an occasional series of notes on one of the sightings which has been added to the records page of this web-site. And this first is about the Brimstone Butterfly (Gonepteryx rhamni), seen on 1st October in Bitterne.

We all associate butterflies with the spring and summer, but many species can be seen later in the year, and the Brimstone is one that is regularly recorded in every month of the year. The Brimstone, along with a few other species such as the Red Admiral (Vanessa atalanta) and the Peacock (Aglais io), hibernates as an adult. This means that you are always likely to run into one over the autumn and winter months as they search for that ideal winter home.

Many people believe that the butter-yellow Brimstone is the species which gave the insect its English name – Butterfly. You may come across this species anywhere throughout the UK but its main distribution is south of a line from Cheshire in the west to South-east Yorkshire in the east.

The following information is reproduced from UK Butterflies web-site.

The Brimstone is a great wanderer and can be found in almost any habitat, from chalk downland to woodland rides to gardens.

Newly-emerged adults spend much of their time feeding, where they always settle with their wings closed, showing a preference for purple and nectar-rich flowers such as Thistle and Devil’s-bit Scabious. The long proboscis of this species also allows the butterfly to take nectar from flowers, such as Teasel, that are beyond the reach of many other butterfly species. With the approach of autumn, the butterfly settles down to hibernate – often among leaves of Ivy, Holly or Bramble.

Adults emerging in the spring nectar on a variety of available flowers, such as Dandelion, Primrose, Cowslip, Bugle and Bluebell. They can often be seen resting with their wings at right angles to the sun to gain the full effect of the warm rays at this relatively-cool time of year.

The skittle-shaped eggs are laid singly on the undersides of the youngest Buckthorn leaves at all heights on the foodplant. Although several eggs may be found together, this is either the result of different females using the same leaf, or the same female revisiting the spot at a different time. Newly-laid eggs are pale green, turning yellow and eventually grey as the larva develops inside. This stage lasts between 1 and 2 weeks.

Males are the first to be seen in the spring and can be seen patrolling woodland edges, hedgerows and other habitats looking for a mate. When a virgin female is found, male and female fly high into the air, often out of sight, before tumbling back down into a bush where they then mate. Females are quite selective about the plants on which they lay – even on sites with many Buckthorns present, only a very small proportion of these will tend to be used by females in the area.

The newly-emerged larva moves to the upperside of the leaf and starts to feed. Despite their superb camouflage, larvae can be relatively-easy to find since they nibble away the edges of the leaf on which they are resting and the feeding damage gives their presence away. When at rest, the larva has a curious habit of lifting the front half of its body off the leaf. The larva goes through 4 moults in total and this stage lasts about a month.

The fully-grown larva usually pupates away from the foodplant and, like the adult butterfly, the pupa is a curious shape, looking like a curled leaf. It is secured to the underside of a leaf or plant stem by a silk girdle and the cremaster. Before the adult butterfly emerges, the yellow spot found in the centre of the forewing can be clearly seen through the pupal case. The pupal stage lasts about 2 weeks.