A Russian visitor at Titchfield Haven 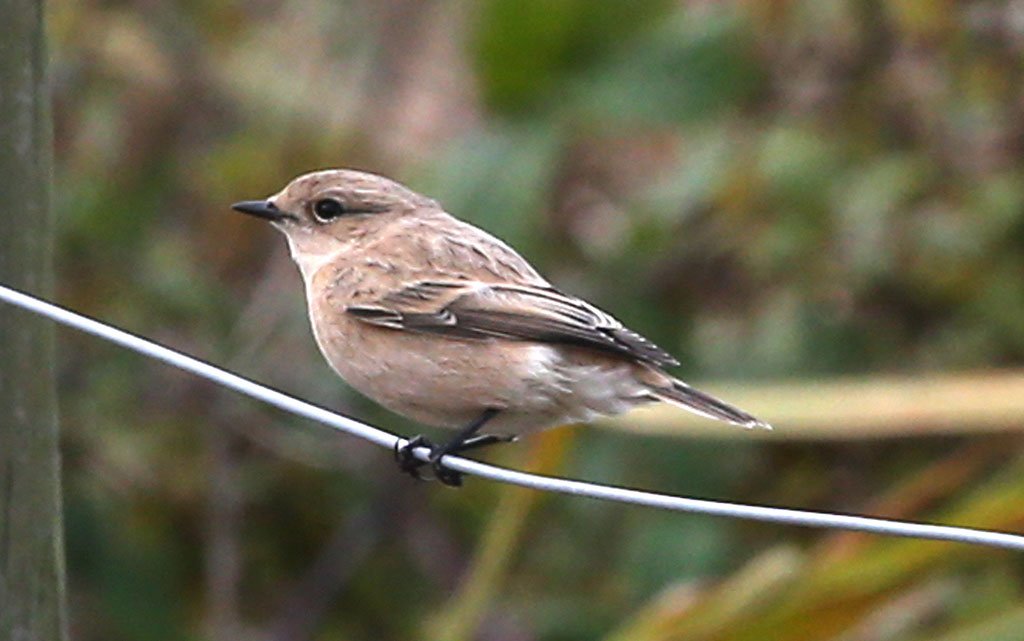 Recently I succumbed to a rare twitching urge and with spare time on my hands, unusual for 2014, I set forth to Titchfield Haven seeking the 321st bird on my rather inadequate British bird list and only the second reported for Hampshire – a SIBERIAN (or EASTERN) STONECHAT Saxicola maura. It would also be the 403rd bird on my really pathetic world bird list. A rather more impressive fact was that it would be the 12th wild bird that I have seen for the first time (a ‘lifer’ in fact) at Titchfield Haven Nature Reserve in the Meon valley – the others in the past included common and arctic terns, spotted sandpiper, pink-footed goose, marsh harrier, grasshopper warbler, spotted crake, Temminck’s stint, marsh warbler and bluethroat. TH was also the first place I ever saw a ‘wasp spider’ Argiope way back in 1984.

Sorry for all this useless information, it is really is no use to anybody. Let us get back to the subject in question. The big question is ……DID I SEE IT? Well yes, of course I saw it, otherwise I would certainly not be writing about it. I don’t like ‘dipping’ , this is what usually happens to me and happened earlier in the year with the Short-toed Eagle in the New Forest, and I certainly didn’t write about that I can tell you. Even though I connected with our Russian friend was not as easy to get as I had hoped. Please read on.

I arrived at TH at about 2:30 having been delayed for 24 hours because it wasn’t showing well with the remains of Hurricane Gonzalo forcing it into hiding. I paid the nearly £4 ticket fee and wrapped the blue ticket around my binocular lanyard so that it stuck together back to back and didn’t fall off. I then strolled up to the new Meadow Hide ignoring the Suffern Hide. It was the first time that I’ve seen the new Meadow Hide, opened two (or was it three) years ago by Radio Solent DJ Nick Girdler. Four excited birders were just leaving at the same time after enjoying fine views of ‘my’ quarry. I sat down facing NW as I was told it was regularly seen by a ‘black stick’ that turned out to be half-prostrate dead stem of a spear thistle. With me were two male birders of not dissimilar age to myself: one wanted just one more look and the other had seen it the other day but thought he would pop in again to see if it had survived the hurricane.

I waited and waited and waited and saw 7 or 8 lively common stonechat around a fence line and adjacent clump of brambles but where was my pallid, short-tailed friend from the east? I was told that the other stonechats didn’t like Russians! The rarity had tried to mingle with its western cousins but they knew it was different from them and had bullied it relentlessly just the other day. The Siberian Stonechat had then shirked away to the far side of the same thistly, rough field and began hanging around another clump of bramble all of its own. Naturally this was further away from the hide and that is just typical.

Suddenly I spotted a pale oatmeal coloured, robin-sized, short-tailed entity in a sedge bed by a sallow tree. It then flew right ignoring the ‘black stick’ and into a clump of sedges and rushes. It was IT – but the bird then buried into the sedges and disappeared. Not good enough for me I’m afraid, but the fellow to my right decided that was enough for him that day. A clumsy juvenile heron then landed and no doubt frightened the Russian chat even more. Herons put the wind up brent geese let alone stonechats! Another couple sat down to the right of me. The gentleman asked ‘have you seen it?’ I said yes, about 2 minutes ago. As time passed by his female companion became increasingly fidgety, bored and cold. The ‘north-wester’ had started blowing into the hide. Just one more look he said repeatedly. 30 minutes later it was all over as they could wait no longer. He said the Russian visitor was just not playing ball. I was starting to lose faith as well. One minute later a young lady with a ‘cowboy’ type hat walked in and sat down to my right. She looked lucky I thought and I was correct. Only one more minute had passed and the determined birder to my left, scope in hand, spotted the bird further right and by a low sallow clump before it returned to its favourite position about two feet right of the ‘black stick’. For the aforementioned young woman it was a ‘lifer’ too.

For the next 10 minutes I enjoyed excellent views of my Russian target as it darted back and forth and every now and then, in chat tradition, sat patiently surveying its surroundings. Amazingly short tail, jet black legs, pale rosy rump and overall pale oatmeal colour but a little darker on the mantle and the head. Also there was a whitish throat, some subtle black streaking above and distinctive broad, pale buff margins to the primaries and secondary’s of the wing. More like a whinchat in colour than a stonechat I thought. No call was heard. What was it doing here though? Its native distribution is Russia is east of a line roughly from Leningrad down through Moscow to the northern shores of the Caspian where as our native species only reaches as far east at central Ukraine and the Crimean Peninsula. Who knows?

One thing I do know I is that there is nothing like ‘twitching’ to make one notice everything.