….that’s what we normally think. Small garden. Central Southampton. When you see something unusual, more often than not it’s a common species seen in an unusual light or at an odd angle. It’s the Occam’s razor approach to natural history observation.

The plain golden hoverfly (Callicera aurata) paid a visit to our teasel for an hour or so. A rare species occurring mainly in southern forests, the majority of records come from the New Forest, although there are scattered records north to the Lake District. Like other members of the genus, the adults of this species are very difficult to find.

The larvae probably develop in water filled cavities and pot holes of broadleaved trees. An adult has been seen about birch logs on a common in north Hampshire, and a preference for dead or old birch on commons and heaths seems feasible. Adults are recorded from June to August. 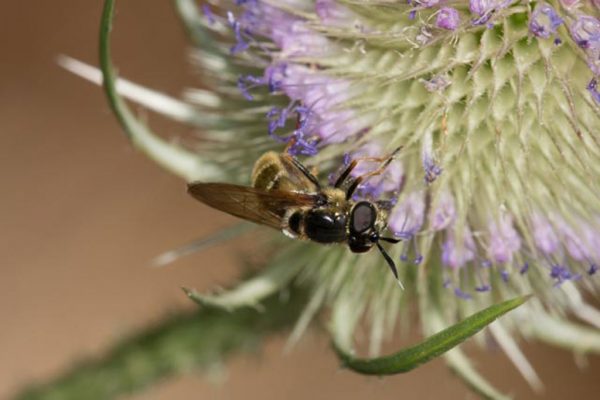 According to the Hoverfly Recording Scheme, this is an infrequent and perhaps declining species with about 15 known post 1960 sites. Records are very unpredictable and there seems to be very little attachment to individual sites, suggesting a species with a mobile nature.

Well it was certainly mobile enough to find us.

And if it can find us, it may find you. Keep an eye out for this medium sized wasp-mimic. It is truly golden in the sun but the long white-tipped antenna are key guides to picking out this beautiful little insect. Although, I understand we may have more chance of winning the lottery than seeing another of these in our lifetime.