The new survey of Hoverflies of Southampton has recently been published and will shortly be circulated to members of the Society.

The survey was launched at an Indoor Meeting held at Edmund Kell Hall, Southampton on 4 March 2013 and was then conducted over the summer/autumn seasons of 2013 and 2014, plus the intervening winter 2013/14. To these records we added local (Southampton area) records of hoverflies (Diptera: family Syrphidae) from the Hampshire Biodiversity Information Centre (HBIC) database as of the end of 2014 and also additional records on the SNHS database up to 30 November 2015.

The HBIC database was accessed with the permission of the Hampshire County Council by Philip Budd, Chairman and Recording Officer of SNHS and Hoverfly Recorder for Hampshire. The rationale for this survey was similar to that of the previous SNHS shield-bug and ladybird surveys (Southampton Natural History Society, 2005 & 2007) in that we were looking to further our knowledge of under-recorded insect groups in the Southampton area and find a subject that might encourage a greater recording effort within the society.

Furthermore, it was considered that, as for the ladybirds and the shield-bugs, a reasonable number of species of hoverfly are relatively easy to observe and identify by the non-specialist. We designed a Recording Form especially for hoverflies and encouraged members to record these insects in their own gardens and to make a note of the date of the records, any nectar sources used, the size of their gardens and proximity to woodland habitat.

On the survey form there was opportunity to record early-season (March to June) records separately from late-season (July to October) records. These recording forms were available from the launch of the survey in March 2013. In addition, some members were able to find the time and enthusiasm to record hoverflies in other locations around the Southampton area. This latter point is important because, unlike in the previous ladybird and shield-bug surveys, it was not possible for sufficient numbers of recorders to find the time to systematically record all of the open spaces in and around Southampton.

In the future there is a possibility that we might set up new recording projects for different insect or invertebrate groups, repeat past surveys, or even work towards a guide summarizing the many SNHS records obtained over the years.

As with any survey, some identifications are straight-forward, others are just difficult – either the hoverfly refused to stand still, or you just couldn’t see that diagnostic feature on the leg or wing. Or the required microscopic study wasn’t possible. Such was the case with the image on this post. 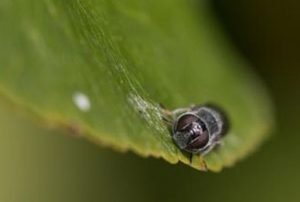 If you think you can “name that hoverfly” – add a comment to the post. Best suggestion wins……..absolutely nothing, since we aren’t sure what the correct answer is.