Peartree Green is a large open space on the eastern side of Southampton between Woolston and Bitterne, and bounded on the west by the Bitterne to Woolston stretch of the Southampton to Portsmouth railway. The higher ground to the east is grass land on a naturally acidic soil whilst the central and western area is a post-industrial landscape and reclaimed marsh. Currently this main part of Peartree Green is a mosaic of scrub and artificially chalky grassland with secondary oak woodland at the northern end. The grassland has a particularly rich flora and fauna, unlike anything else in the Southampton area. From the higher parts of the green a panorama of central Southampton can be enjoyed. Peartree Green is currently a SINC (Site of Importance for Nature Conservation). 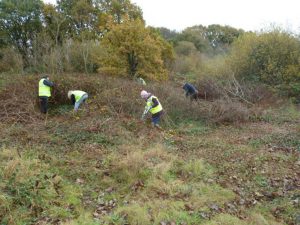 In the last two years, a group has been formed to try to improve and conserve the habitats of the green, promote positive public use of the area and turn it into a Local Nature Reserve.

This group is called the Friends of Peartree Green and it evolved from an earlier group called Peartree 21. With the support of the Peartree Ward local councillors, Natural England and Southampton City Council, which owns the site, the stated objectives are rapidly being met.

Previously the site had been managed by the city council with very little funding, but in the light of further funding cuts and the unusually wet and mild weather in recent years, Peartree Green is rapidly progressing naturally into ‘Peartree Scrubs’ and is gradually losing its high wildlife value. To try to reverse this process the Friends of Peartree Green have begun practical conservation work to help control scrub and to gradually restore areas that have been degraded. The group is also carrying regular litter picks and planning some future work on the paths. The group runs conservation work parties every third Sunday of the month from October to March. More details from myself.

Friends of Peartree Green have already compiled useful ecological data on the site, from past surveys etc., and have begun new survey work in the last year on fungi, mammals and at a bioblitz event in August 2017. In 2018, the group plans to start a breeding bird survey and carry out a butterfly transect to compare butterfly numbers to data obtained 15 years ago. The group is also conducting educational events with local schools, and engaging residents, especially dog walkers. If you would like to be more involved in this exciting project please contact Phil Budd philipbuddathos@gmail.com.

The latest development was the approval of Local Nature Reserve Status by Southampton City Council at the cabinet meeting on 14th November. This approval is subject to final objections and so has not been confirmed at the time of writing. When final approval has been confirmed the plan is to organise a launch event in April 2018.