Up with the Lark

When one of our longstanding friends said she wanted to go on a dawn chorus walk to find out more about the birds of an English spring, she had come to the right place. Jointly with Hampshire Ornithological Society (HOS) the Natural History Society was hosting a dawn chorus walk at Farley Mount.

Being the bright early morning person that I am, I decided to join Heather for this walk to see if it met with her expectations (and approval). Given that the walk was lead by Julian Moseley I felt that was never in any doubt.

So up at 3am. Jan has succumbed to the sore throat and general run-down feeling which has plagued me for the last few days (proving it wasn’t man-flu) so I’m on my own. Fortunately we had packed provisions and made ready binoculars, cameras, bat detectors, torch, warm clothing, and kitchen sink the previous evening so I was able to make it out the door at the first attempt. I wasn’t sure of the car park we were meeting in so used the time-honoured tradition that any car park with cars in it at this time of the morning would be a dawn-chorus walk. And so it proved. I am advised this may not be true in all parts of the country.

Seven of us gathered, druid-like, to await the rising sun. Which attracted the attention of a passing police patrol car. The police officer was easily convinced that we meant no harm and wished us good luck for the  morning, and the number of Tawny Owls we could hear calling – male and female, call and response – presaged good things to come. At least five owls were calling and it may have been many more than that. As we waited the birds started to wake up. Here a Blackbird, there a Song Thrush, then Robin and Willow Warbler. And a Blackcap. The first of many today.

There were other sights on this clear but chilly early morning. Mars, glowing red, just under the waxing crescent moon. Jupiter with at least three of its moons, Ganneymede the furthest out of those visible with binoculars, and, I guess, Europa and IO. Then at 5am literally dozens of vapour trails heading for Heathrow and Gatwick, beginning to queue for the earliest landing slots at 6am.

Then it was light enough, bright enough, to set out on a three hour easy amble around the chalk landscape. The ever patient Julian explaining the difference between the bi-syllabic Great Tit and Coal Tit while a Chiffchaff is adding confusion. And then making sure that everyone can fix on the Blackcap. Get that one filed away and it’ll be easy next time you hear one (and we heard many). But what about Garden Warblers? Julian again expressed a view on the differences in phrasing and pace. And then admitted even he finds some difficult to separate from Blackcap.

Lots of birds and lots of chat. One of the group was a local who knew a bit of the local history of the site. But we also considered the short migration hops of the Blackcaps which over-winter in the UK.  The requirements of some birds – such as the Nightingale and European Turtle-Dove – for the optimum habitat. And the balance between cheap food and chemical free farming. Julian went so far as to suggest we should consider spending more on food and less on electrical gadgets, causing me to have a minor relapse. And habitat loss caused by over-grazing of deer (prompted by seeing three Muntjac on the path which went off barking, resolving the earlier query).

Then all the time more birds, more birds. Whitethroat and Yellowhammer. Jay and Nuthatch. The evocative, and now almost ubiquitous, Raven croaking in the distance. We listen almost more intently to Julian than to the birds as he carefully explains why this song was this bird and not that, why that call came from that bird, not this. We hear the tiny Goldcrest, still just within my hearing range. The fact that men begin to lose hearing at the high notes and women at the low is apparently not scientifically proven to be the reason why men and women ignore what each other say. As Heather explained, her partner’s response to some forgotten task or event is often, “you may have told me yesterday, but was I listening?”

A final stroll with the cows (breed? No idea, you tell me) across the chalk meadows now being warmed by the climbing sun, and which will soon be alive with butterflies, for a car-boot breakfast and then I’m away. 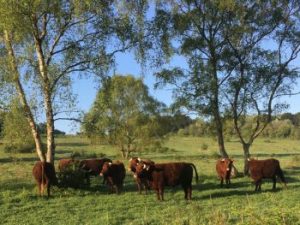 So, did the whole event meet Heather’s expectations and with her approval? Oh yes. A lot down to Julian and his expert leadership. A lot down to Heather for wanting to learn. But mostly, as one would expect, down to the birds.

If you have friends who want to get closer to wildlife, even if they don’t know it yet, point them at our events page. Many field trips are family friendly and talk to the trip organiser if you want more details of any event.

The birds I heard (Julian will have heard many more)