The harlequin of orchids 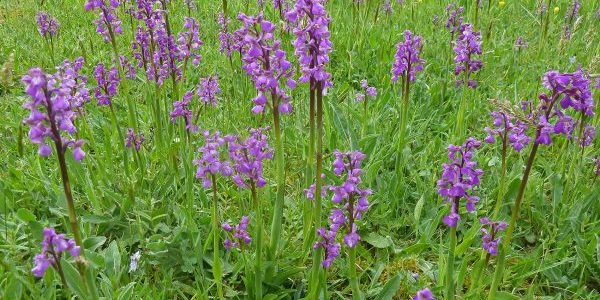 10 people arrived on a mild, dry evening for a short walk around St Mary Extra (aka Butts Road Cemetery) lead by Cath Corney. Cath gave a brief history of the Cemetery established in 1879 under Itchen Urban District Council, which was later taken over by Southampton City in 1922.

This walk was primarily to look for the orchids which grow here where they appear to thrive on unimproved pasture. The grass is left long and cut later in the year.

The orchids Cath particularly wanted to show the group were the Green Winged Orchid (Orchis morio), and they didn’t disappoint. Pink or purple with three lobes, their leaves are narrow and pointed, and do not have spots on them like many others. The plant is native to Western Eurasia, Europe to Iran it can be found throughout England, and in some coastal populations in Wales and Scotland.

Its Latin name, morio, means ‘fool’ and refers to the jester-like motley of its green and purple flowers. 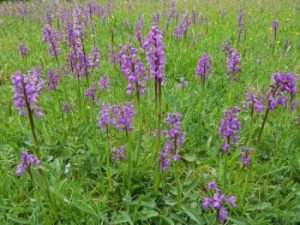 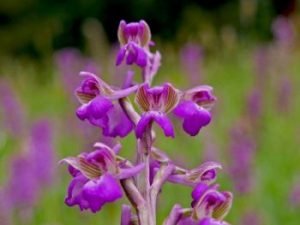 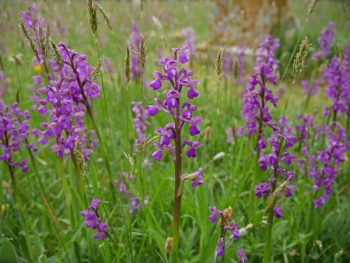 The group was also able to find the leaves of the common spotted orchid. A second visit in June should see the flower spikes.

Other plants seen on the walk were recorded with help from Martin Rand and John Vetterlein in identification.

A green woodpecker also reminded everyone that having just a small wild patch in an urban environment can encourage wildlife.

Many thanks to all who came along and to Bruce Larner for his photographs.