On not so little pines… 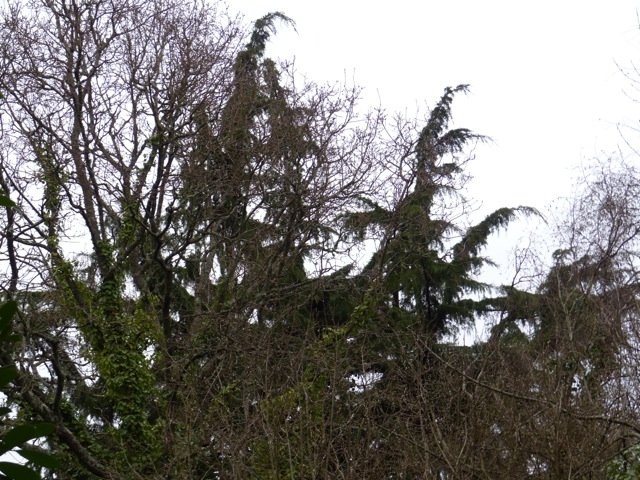 In this case, a Himalayan Cedar.

There is a tree in my local patch. I believe it to be a Himalayan Cedar Cedrus deodara around 30ft or more tall and, although I had seen the top, I had never seen the base as it was completely surrounded by rhododendron.

When I finally reached the base to have a closer look I was surprised to see that it started approximately 6ft up, and was growing from a Monterey Pine Pinus radiata.

This particular cedar is at home in a harsh mountain environment and that is what it does best — it survives in extreme conditions. It may have been an escapee, possibly part of a contaminated seed planting of Rhododendron . This was a popular plant in the late 19th and early 20th centuries and its range with the cedar.

I know this area well, SU405165, as it was a favourite playground for me and my mates when I was young. There used to be a house close to where I found the tree which may have been a worker’s cottage for the big house on the estate which was originally called Fern Lea (later renamed Ingersley when rebuilt). It’s likely that both houses were there in the late 19th century when rhododendron planting was becoming popular. Indeed, these are still thriving in this area.

The cedar seems to be healthy and I see no reason why it shouldn’t be around for years to come as long as the host pine tree remains in good shape!

Just a little note of interest – when my friends and I were playing in this very area we found an unexploded bomb. We played catch with it all the way to the local pub where the police were called and they nervously took it away in a car, securely placed between 2 cushions!!